Myth #1:  Keep the air in your lungs after each breath in freestyle, breaststroke, and butterfly.

In all three of these strokes, elite swimmers are releasing some of the air from their noses after each breath.  The released air bubbles travel underneath their bodies, before reaching the surface. The reason that swimmers release this air from their noses is to reduce frontal drag. In testing in Florida, we found that the air bubbles under the body reduced drag by 9.3%. After taking your breath, don’t leave all of the air inside your lungs. 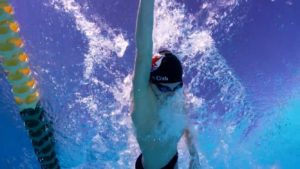 Myth #2:  Separate your fingers after the hand entry in all four swimming strokes.

It is true that separating your fingers slightly during the swimming pulling motion can increase the propulsion. However, you do not want the hand to enter the water with your fingers separated. Nor do you want to allow your hand to turn out to the side or up or down at the entry. During this early part of the pulling cycle, the hand is moving forward causing frontal drag. In our drag testing, we found that with the fingers separated widely at race speed, the frontal drag increased by 18%! The thumb out increased drag by 11%. At hand entry, squeeze your fingers and thumb together with the wrist straight. Then spread the fingers slightly once you start your catch. 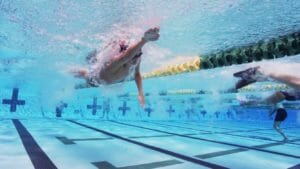 Myth #3:  In freestyle, keep your head in alignment with your body.

Many swim coaches have learned that tilting the head forward very far in freestyle is a bad idea. While that head position may help increase propulsion, it also increases frontal drag. The increase in drag more than offsets the increase in propulsion. Surface or wave drag can account for up to 25% of the total drag at race speed. Most of that drag comes from the head sticking out of the water.  Many coaches now teach to keep the head in alignment with the body in freestyle. However, to reduce drag even further, the neck needs to be flexed slightly with the chin tucked close to the chest. With a slight flexion of the neck, the head will submerge after each breath. To get your head underwater, go beyond ‘head-in-alignment’ and flex slightly after the breath. 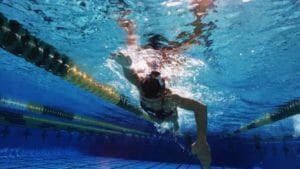 Myth #4:  In freestyle (and breaststroke after the kick), the body needs to remain as straight as possible.

While we associate a straight body position with less drag, it turns out that a slight flexion of the hip causes less frontal drag than a ‘straight’ body. Most elite sprinters elevate their core instinctively to cause this slight flexion to occur. Until we tested these two positions, I always thought that a straight body was best. Not so. The frontal drag is about 10% less in a slightly flexed body position.

Myth #5:  The up kicks in freestyle and dolphin generate little or no propulsion.

The up kicks in freestyle and butterfly are like the poor, forgotten step-children of swimming; often neglected. The increase in a swimmer’s velocity derived from the up kicks ranges from zero to .6 meters per second, depending on the effort put into it.  Most of the swimmers we test are closer to zero because they work the down kick, but not the up kick. It is more difficult to work the kick in both directions, rather than just on the way down. Yet that is what the great swimmers do. Don’t forget about the up kick. 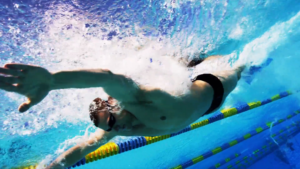 Myth #6:  The dolphin kicks off the wall should begin after a short glide.

Most coaches and swimmers think that you should glide for a short period before taking that first dolphin kick off the wall. That is not what the elite swimmers do; at least not in the sprints and middle-distance races. In testing elite butterflier, Marcus Schlesinger, we discovered that his times to 4 meters were the following:
1. Long glide off wall: 2.38 seconds
2. Short glide off wall: 2.25 seconds
3. No glide off wall (kicks start immediately) 2.11 seconds.
Kick immediately off each wall in the fly, back and free and save yourself at least .14 seconds on every turn! 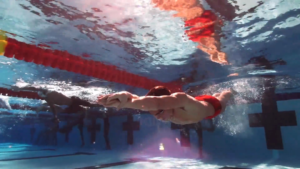 Yours in swimming,
Gary Sr.